It’s the celebratory sparkling, bubbling drink that brings great taste and enjoyment to any occasion…Champagne! The carbonisation of champagne has always been one of its big selling points as it causes the pop of the cork and quickly brings on the party-spirt since also gets the alcohol into the bloodstream more quickly! We all know it can make your head a little fizzy. But how do those Frenchies make their bubbly…well, bubbly?

The Méthode Champenoise literally means the traditional method by which Champagne wine in the Champagne region is produced. Winemakers first produce a dry white wine which can be made from 100%  Chardonnay or blended with Pinot Noir, Pinot Meunier and Pinot Gris. This white is a fully finished wine that has undergone fermentation in cement or steel tanks.

But, instead of just bottling the white and calling it a day, Champagne winemakers add extra sugar and yeast to the white wine. And then, the magic happens.

Because of the additions, a second fermentation occurs inside the bottle. The yeast turn sugar into alcohol and CO2. The carbon dioxide (CO2) cannot escape from the bottle and is dissolved in the champagne, creating the bubbles.

Then, the bottles sit. They can mature, lying horizontally, for one year or 3 years or even more. When the maturation is over, there is still residual yeast and sediment in the bottle. And you don’t want that in your bubbly! 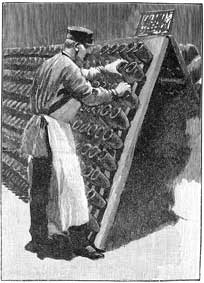 So, the yeast and sediment must be removed in a process known as riddling, “remuage” in French.Traditionally, the bottles are put into a “riddling rack” (shown below) which puts the bottles in a semi-vertical (45º exactly) position. The man below, Le Remueur, was the worker who had the unlucky task of hand turning each bottle…each day, everyday, for up to 56 days…to gently encourage all the sediment to sink down to the bottom of the bottle. After 6 weeks, the bottle is pointed straight down and the sediment consolidated at the bottom.

How do you get the sediment got of the bottles? Well, the bottles have to vomit it out. No joke. The French call this phase “dégorgement” meaning disgorge or vomit. The cork and the sediment are removed without losing large quantities of the liquid. What used to be a skilled manual process is now done by mechanically, freezing  the neck of the bottle and removing the frozen sediment. The bottle is topped off with more Champagne and possibly added sugar for give desired sweetness and flavor.

Then it’s corked and then it’s done! But another interesting note, the cork starts out as a straight ‘tube’ shape found in all other wine bottle. It is only the pressure and system of corking that gives it its mushroom head and flared bottom that we all know and love to pop. 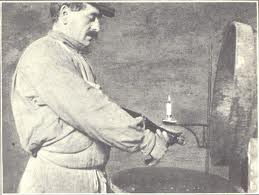 There you have it. The mystery behind the making of Champagne. Yes, it would have been easier if they just added some tonic to Chardonnay but you don’t argue with a 300 year old process created by Dom Pérignon himself.