The Origin of the Word “Honeymoon”

The Origin of the Word “Honeymoon” 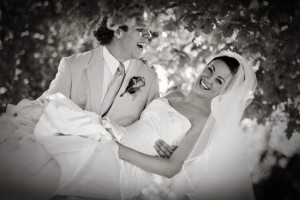 Did you know that the term “honeymoon” has associations with wine? It is thought that the word “honeymoon” comes from a tradition dating all the way back to ancient Babylon. For the month after the wedding, the groom was supplied with all of the mead (honey, water, and yeast) that he could drink by his new father-in-law. Mead played an important role in the wedding celebration because it was thought to increase virility in men and fertility in women. Their calendar was lunar or moon-based, so this month of free mead was called the “honey month”, the precursor to our concept of a “honeymoon”. A similar tradition existed in Ireland for their “mi na meala” (month of honey). Friends of the newly married couple would give them enough mead for the first lunar month after their wedding, along with special goblets to drink it in. A way to incorporate this tradition today in your own nuptial festivities could be to use toasting flutes from your own wedding filled with Irish Mead to celebrate your one-month anniversary!

This is a picture of my husband and me at our wedding last year in France!

About the Author: Hilary